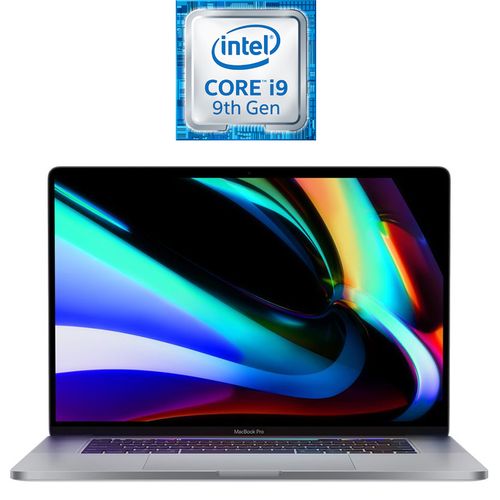 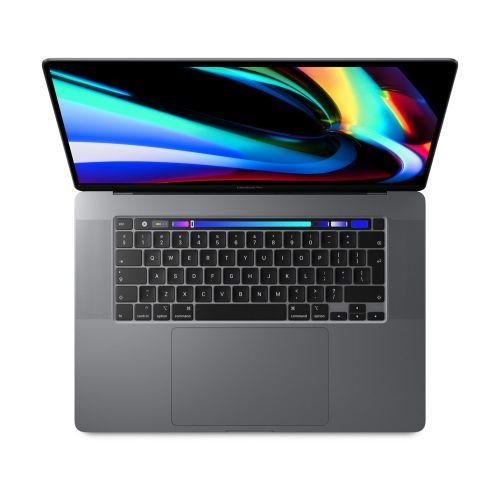 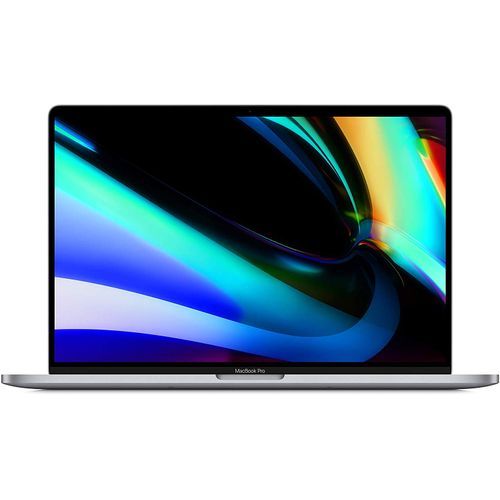 The MacBook Pro features a large 16" Retina Display with 500 nits of brightness. Featuring a 3072 x 1920 resolution and 226 pixels per inch, the Retina Display delivers nearly 6 million pixels. It also supports the P3 wide color gamut, which features 25% more colors than the commonly used sRGB gamut, for even more vibrant greens and reds. The display is calibrated at the factory for accurate gamma, white point, and primary colors.

The Magic Keyboard on this MacBook Pro features a redesigned scissor mechanism that delivers 1mm of key travel. There's also a physical Esc key and an inverted "T" arrangement for the arrow keys. Combined with the Touch Bar and Touch ID, the Magic Keyboard provides a comfortable, accurate typing experience.

With a sophisticated fan design, the MacBook Pro features a large impeller with extended blades along with bigger vents, resulting in a 28 percent increase in airflow while the 35 percent larger heat sink ensures more efficient heat dissipation. Together, these advancements in cooling capacity allow the MacBook Pro to sustain up to 12 more watts during intensive workloads than the previous design.

The MacBook Pro introduces a redesigned six-speaker, high-fidelity sound system. The Apple-patented force-canceling woofers use dual opposed speaker drivers to reduce unwanted vibrations that distort sound. As a result, music sounds more clear and natural while the bass can go half an octave deeper. An upgraded high-performance mic array delivers a 40 percent reduction in hiss and an improved signal-to-noise ratio. There's also a 3.5mm headphone jack if you need to keep things quiet around you.

The Touch Bar replaces the function keys that have long occupied the top of your keyboard with something much more versatile and capable. The multi-touch, Retina-quality display changes automatically based on what you're doing, from showing traditional system controls, such as volume and brightness, to more directly interacting with or browsing through content. Intelligent typing features like emoji and predictive text improve the typing experience, and you'll be able to customize the Touch Bar to fit your needs. The Touch Bar can also adapt to apps, such as Mail, Safari, Messages, and even third-party apps like Adobe Photoshop, so you'll have access to useful functions previously hidden in menus.

A Touch ID sensor has been integrated into the power button, so you can quickly log into your account, even when another user is logged in. You can also use it with Apple Pay to securely purchase things over the web.

With True Tone technology, the display and Touch Bar deliver a more natural viewing experience for design and editing workflows, as well as everyday tasks like browsing the web and writing email.

With the Apple T2 chip, the MacBook Pro delivers enhanced system security with support for secure boot and on-the-fly encrypted storage, and also brings "Hey Siri" to the Mac.

Thunderbolt 3 is a hardware interface that utilizes the reversible USB Type-C connector. Doubling the speed of its predecessor, Thunderbolt 3 features a maximum throughput of 40 Gb/s when used with compatible devices. The connector also transmits data via USB 3.1 at up to 10 Gb/s, and dual-bandwidth DisplayPort 1.2 allows you to connect up to two 4K displays simultaneously or one multi-panel 5K display.

Simultaneously supports full native resolution on the built-in display at millions of colors and:

macOS is the operating system that powers everything you do on a Mac. macOS Catalina brings new, dedicated apps for music, TV, and podcasts. Smart updates to the apps you use most. And Sidecar, which lets you use iPad as a second display. So you can take everything you do above and beyond.