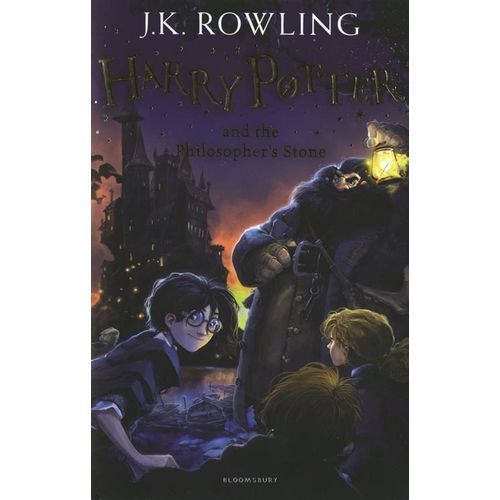 Brand: Generic | Similar products from Generic
3 out of 5
(2 ratings)
EGP 65
EGP 8019%
Purchase on the APP and get extra 5% off with JumiaPay at checkoutEnjoy unlimited Free Delivery with Jumia PrimoGet 5% cashback on recharge & mobile bills payment on Jumia One. Use code: TELE5

Click here to list your product
The cover shape may be vary depend on the Edition Number or the publishing house‎.
Harry Potter and the Philosopher's Stoneis a fantasy novel written by British author J. K. Rowling. The first novel in the Harry Potter series and Rowling's debut novel, it follows Harry Potter, a young wizard who discovers his magical heritage on his eleventh birthday, when he receives a letter of acceptance to Hogwarts School of Witchcraft and Wizardry. Harry makes close friends and a few enemies during his first year at the school, and with the help of his friends, Harry faces an attempted comeback by the dark wizard Lord Voldemort, who killed Harry's parents, but failed to kill Harry when he was just 15 months old. The book was first published in the United Kingdom in 1997 by Bloomsbury. In 1998, it was published in the United States by Scholastic Corporation under the title Harry Potter and the Sorcerer's Stone. It won most of the British book awards that were judged by children and other awards in the US. The book reached the top of the New York Times list of best-selling fiction in August 1999 and stayed near the top of that list for much of 1999 and 2000. It has been translated into at least 73 other languages, and has been made into a feature-length film of the same name, as have all six of its sequels. Most reviews were very favourable, commenting on Rowling's imagination, humour, simple, direct style and clever plot construction, although a few complained that the final chapters seemed rushed. The writing has been compared to that of Jane Austen, one of Rowling's favourite authors; Roald Dahl, whose works dominated children's stories before the appearance of Harry Potter; and the Ancient Greek story-teller Homer. While some commentators thought the book looked backwards to Victorian and Edwardian boarding school stories, others thought it placed the genre firmly in the modern world by featuring contemporary ethical and social issues, as well as overcoming obstacles like bullies. Harry Potter and the Philosopher's Stone, along with the rest of the Harry Potter series, has been attacked by some religious groups and banned in some countries because of accusations that the novels promote witchcraft under the guise of a heroic, moral story. Other religious commentators have written that the book exemplifies important viewpoints, including the power of self-sacrifice and the ways in which people's decisions shape their personalities. The series has been used as a source of object lessons in educational techniques, sociological analysis and marketing.

Harry Potter and the philosoher's stone